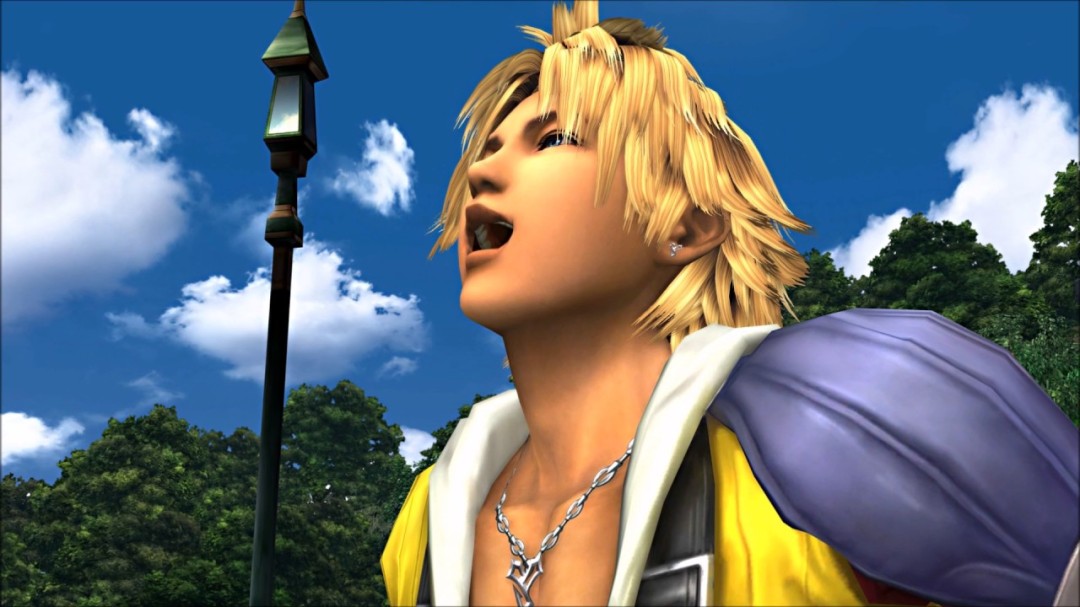 Quality of Life: Improvements That Should Be Mainstays

Look, I’m all for artistic freedom when it comes to game development. I roll my eyes into oblivion every time From Software releases a game and the whiners at Kotaku publish seventy three posts about how there needs to be an “easy” mode. When Polygon comes to the rescue of black gamers everywhere by calling the character of Barret in the Final Fantasy VII remake racist because he… talks like a black guy, I wish I could reach through the screen and give the author a good flick between the eyes.

However, there are certain features in video games that can only benefit the game they are in. I’m not talking about adding a physical path to the next quest objective, or giving me homing grenades that one-shot a boss. I’m talking about seemingly small additions that can remove minor annoyances in a game and therefore make it even more enjoyable. “Quality of life” improvements, as they are often referred to, are some of the very few things in gaming that everyone (with the exception of a tiny few) can agree are welcome. There are a few things I have seen in games here and there that seem like a small issue, but somehow make the experience much better. So much so that I think any game (where it makes sense) would benefit from the inclusion of these mechanics.

Call of Duty has a lot to unlock. Rank up your MP5? New barrel attachment. Fifty headshots? Shiny little emblem. Took three steps? Enjoy your new calling card, you overachiever. To assist in finding where all of these unlockables are housed, the game puts helpful little markers on each category that has a new toy that you haven’t checked out yet. This is great in theory, but when you’re unlocking something every time you breathe, you’d be hard-pressed to see a screen where these markers weren’t present. 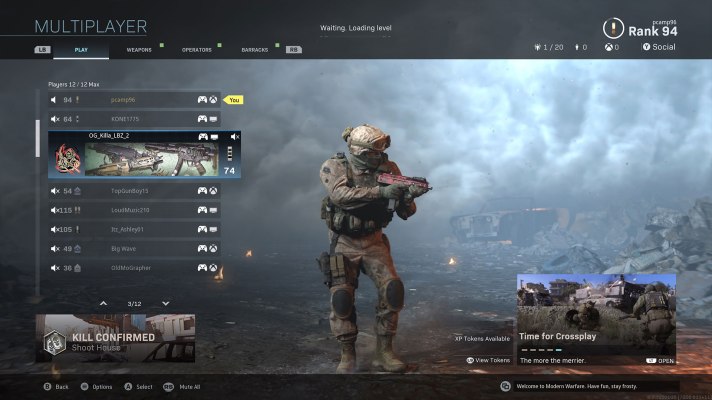 That’s why I was tripping over my balls in excitement when Infinity Ward added the ability to remove these markers with the press of a button in Modern Warfare. No longer did I have to sift through the dozens of weapons and other customizable items to find all of my new stuff just so I could highlight each one to get rid of that annoying green square.

This is a feature that I wish was present in every single multiplayer game, or any game that features unlockable items of any sort. I know, it doesn’t change the actual gameplay in any way. But if you find little annoyances in your menus that make your eyes twitch, the lack of this feature means you’ll be driving yourself insane trying to either clear the damn notifications or trying to ignore them.

When Apex Legends launched, I figured I would try out this neat-looking free game. The only thing I stood to lose was an hour or so if I didn’t end up liking it. Spoiler alert: I like it a lot. One of the reasons I like it is that it makes communicating with your teammates a breeze thanks to the Ping system. If you want to call attention to the weapon you found for your squadmate, you no longer have to shout the name of the weapon and jump up and down like a damn fool until they see you and come get it. You just look at the item, press a button, and a waypoint appears for everyone on your team to see. Even more helpful is your character calling out whatever you pinged. Mozambique here! 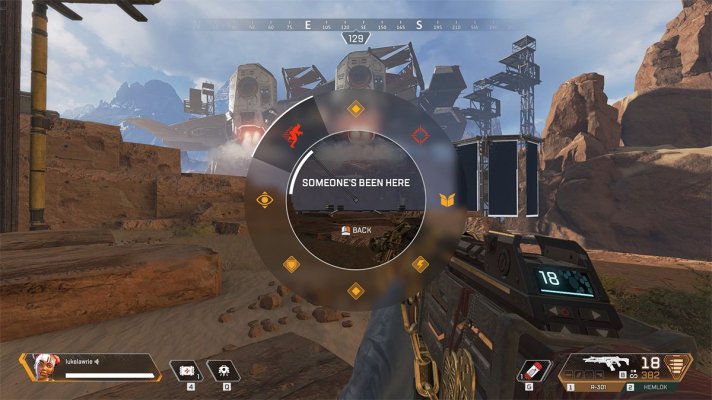 My fiance and I are currently playing through the Halo games, and I miss the ping system so much. I have to report to the most primitive methods when I find ammo for her sniper rifle or see a Hunter that I want her to be the bait for.

“Over there! No, the other way! On the other side of that tree. Fuck, why did you turn around again? Left. Other left. Okay there he is. Yeah, I already killed him.”

Pretty much any game that has teamwork aspects, whether in competitive multiplayer or cooperative campaigns, would automatically be improved by some form of the ping system. Respawn deserves huge props for this innovation. More props go to Infinity Ward for including the least helpful version of this system in Warzone.

I can think of a dozen cutscenes from various games that my life would be better off without (see exhibit A below. That laughing scene was god-awful). Whether it’s a scene that has horrible, cringe-inducing voice acting or writing, a straight-up borefest, or just a scene you’ve viewed dozens of times already, the ability to skip it would be just wonderful. 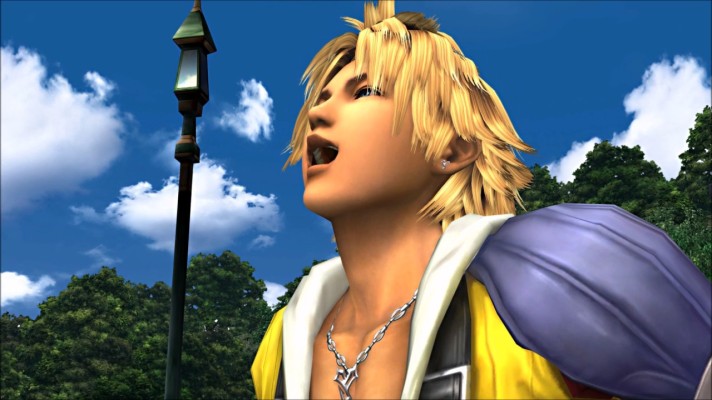 If you’re not familiar, the screenshot above is from Final Fantasy X. It just so happens that there’s another scene that I never want to see again in that same game. It’s not a bad scene or anything, but it happens right before one of the toughest mandatory boss fights in the game. So on my first ever playthrough, I was treated to that minutes-long scene about a dozen times.

This same skipping option would be loved by pretty much everyone if it were applied to tutorials. Some of these game-opening “learn the ropes” segments are woven into the story, while others are uninspired snoozers that literally put you in a training area and tell you that the right trigger fires your weapon and the left stick moves your character (looking at you, Gears 5). Either way, multiple playthroughs will ensure that gamers dread this part. True, the ones baked into the narrative are a little tougher, but if it’s possible for a developer to offer the option to skip, it would be appreciated.

A Map of Your Journey So Far

This is something that very few games have included. In fact, I didn’t experience it until The Legends of Zelda: Breath of the Wild (and even then, it was only included as DLC). If I brought up the world map, I had the option to display a huge, chaotic line that showed my exact path through the game world. This allowed me to easily identify areas I hadn’t yet explored, so I knew the locations where undiscovered secrets might be hiding. 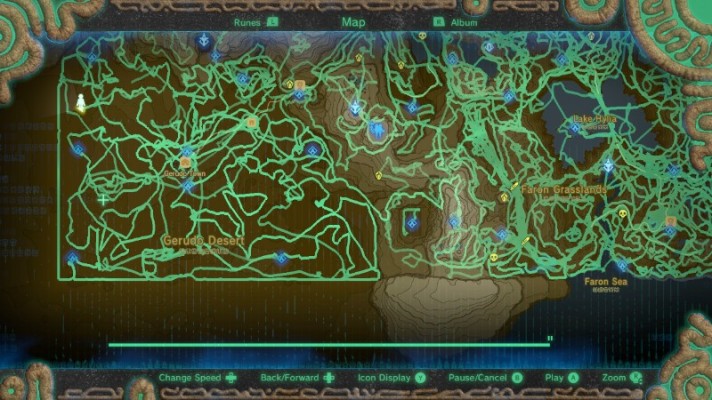 Admittedly, plenty of games don’t require this feature. Ubisoft’s open world games such as Assassin’s Creed Odyssey and Watch Dogs have some way of viewing any and all points of interest on the map, so a record of your exact steps won’t be quite as useful as in BotW. Still, there are plenty of games that could benefit from this.

Point of No Return Warnings

A few months ago, I was playing through The Surge 2 (a criminally underappreciated game, by the way). I came upon a door that I tried to progress through when the game presented this message (also seen in the below screenshot):

“A major turning point in the story lies ahead. There will be no turning back after this.” 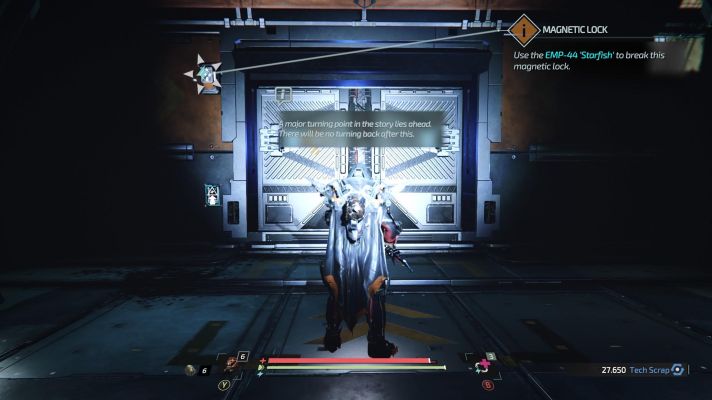 Basically, the game was telling me to take care of any side shit before going through the door, because this was my last chance to do so. When I saw this message, I gained a little more love for Deck 13 (the developers). They want their players to experience as much of the game as possible, and this little addition shows they care about their fans’ valuable time.

There are a few games that implement this feature in different ways, and it always seems forced. The recent Final Fantasy VII Remake is a great example of this, with Aerith literally shouting “This is the point of no return” before you enter the final confrontation. While this instance feels forced, I still prefer it to accidentally stumbling into an area that won’t let me go back.

I know some people might not like the idea of a warning message, as it breaks immersion. I get that. So maybe the devs include the option to toggle those messages off at the start of a playthrough. Everyone’s happy. World peace has been achieved.

3 thoughts on “Quality of Life: Improvements That Should Be Mainstays”